The first single from The New Dawn – The Great Insurrection will be released Friday 19th February 2016, and will be accompanied by the premier of our very first music video!

The single will be released exclusively through a “pay-what-you-want” rate on www.Dakesis.Bandcamp.com, with the price starting at £0.00. 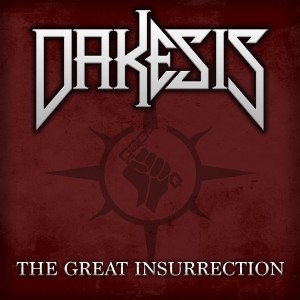 Vocalist Gemma Lawler says “When it came to picking a single, this was the obvious choice. The Great Insurrection is a pivotal song in The New Dawn’s concept, its themes of frustration and eventual uprising encapsulate the revolutionary spirit of the album”

The video went from conception to completion in 48 hours, filmed and edited entirely by drummer Adam Harris who says “It’s the first full length music video I’ve produced, and it’s been a great experience and exercise in producing results under pressure. I think I’ve managed to capture what Dakesis is about, and who we are as performers.”

The New Dawn is released worldwide on Thursday 10th March, with a hometown launch party taking place at the Birmingham 02 Academy. A second album launch event has been added at The Black Heart in London on Friday 1st April .

Album Pre-Orders and bundles can be found in our webstore