The New Dawn Rises In 7 Days! 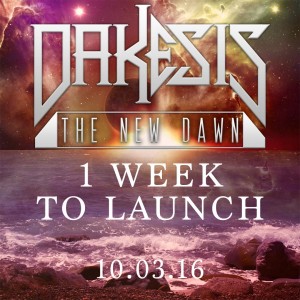 Only one week to go! How time flies, it seems not that long ago we were setting up to start the first day of drum tracking, and now we’re in the very final days before launch!

This album has been a really emotional roller-coaster ride for us, but now that all the hurdles and obstacles have been overcome and we’re ready to share it with the world we couldn’t be happier or prouder with what we have created together.

Our homes and studio are full of boxes and boxes of CDs, piles of t-shirts, massive flags and bits and pieces of costumes, there are invoices and to-do lists everywhere and  four very stressed looking band members (and occasionally a very laid back session keyboard player!) trying to keep it all in order (thankfully we have Amie and her mountain of spreadsheets to ensure that everything is where it ought to be!) – planning an album launch is so much more than recording a bunch of tracks and getting someone to whack out a few CDs for you!

We have reached the point where the album and it’s release consume our every waking hour – and you know what? We wouldn’t have it any other way!

Tomorrow we will share snippets of every song from the album publicly for the very first time, 13 tracks that are the culmination of almost four years work. We’ve put together a track-by-track video, with a few stories and anecdotes about the songs, about the writing process and of course a few moments of silliness as we recollect the whole process of this album and take you through what each song means to us. You can head to our YouTube channel and hit subscribe RIGHT NOW in preparation…you know…if you want to… =)

We will be playing The New Dawn in it’s entirety for the first and perhaps only time ever at the 02 Academy in Birmingham at our hometown launch party on release day. With almost 90 minutes of music it is likely the only time we will get to play the whole piece as we intended for it to be heard…though who knows maybe in 10 years time we will do a special anniversary show!!

You can find all the info and ticket links here – and as it’s so close to launch we have set everything with the option of “collect at the launch party” so you can order now and save on P&P by picking it up from the merch desk. What’re you waiting for?! Get your hands on some tickets and tasty tasty merch bundles in our webstore! 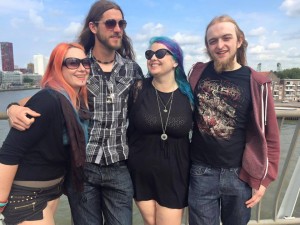 These next seven days will be stressful, they will be exciting, and they will be nerve-wracking, but we know that this time next week we will be getting ready for a party the likes of which we’ve never seen before. When that intro track starts and we step out to a room full of friends, know that you are watching the happiest people in the world doing the thing they love the most.

There may well be quite a few lumps in the throats on stage by the time we get to the final notes of the final song. This album has been, and continues to be the absolute center of all we do. If you all like it even a fraction as much as we do, we will be over the moon!

Thank you all for years of continued support and friendship, as some band once said – the countdown’s begun, the warhead is armed.